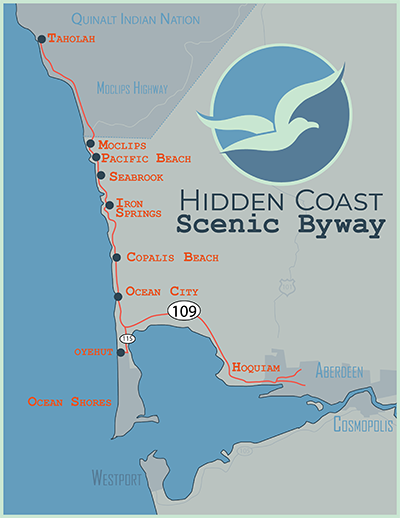 Hidden Coast Scenic Byway brings access to the beaches within steps from your vehicle or vacation home. Razor clam digs from autumn into spring are like lining up for your favorite concert venue.

And there's more from hiking trails with a hint of the Olympic National Park and that forested feel to ocean activities including kite-flying, kayaking, surf-fishing and a ride on a fat-tire bicycle or horse.

Activities and events are year-round on your Hidden Coast Scenic Byway including:

Along the Hidden Coast Scenic Byway, bald eagles soar and shorebirds surround. From searching for sand dollars or razor clams, watching for storms or whales, you'll find the sea life and ocean calling you.

The peninsula is rugged country, forested and mountainous in the interior with a narrow coastal band along the Pacific Ocean. The byway follows the north shore of Grays Harbor from the City of Hoquiam to a crossroads called Hogan's Corner, then turns north along the Pacific Coast, passing through a series of small beach towns before it reaches the Quinault Indian Nation town of Taholah.

Just over a two-mile segment of the byway heads south from Hogan's Corner to Ocean Shores, one of Washington State's most popular tourism destinations. Travelers access the byway from US 101, the Pacific Coast Scenic Byway. From the south, travelers may be continuing a trip from the Oregon Coast, crossing into Washington by the Megler - Astoria Bridge over the Columbia River.

From the north travelers may have driven from the Strait of Juan de Fuca and Olympic National Park. Travelers coming to the region from the Puget Sound area typically travel across US 12 from Olympia, connecting to US 101 at Aberdeen.